A leap of faith

I have been plagued by a question for the past couple of weeks. It’s been keeping me awake at night. I just don’t understand.

A spider has built a web across the alcove I keep my bin in. Every time I put the bin out it’s like a scene from Raiders of the Lost Ark. I even do the rolls and everything. Although I’ve not found a golden Monkey God, although I do have a coconut one (compete with flashing eyes).

All bow down to the monkey god! It also sports some fetching red lipstick.

After destroying the spiders web, I feel guilty, but after returning the bin later on in the day, the spider duly sets to work and re-spins it’s web.

Now my question, which I cannot answer, is how!? Not biologically, but physically. I understand how it can be constructed, but it relies, as far as I can see on anchoring the silk in three points. The rest is then easy.

We’ll call the spidery points, A, B and C.

A is easy. The spider starts spinning the web and anchors it to the left-hand wall. Now, to get to point B, on the right-hand wall, how does the spider get there? It’s a good three feet away. Does it take a running jump, a leap of faith, and hope that it (I’ll call it, ‘it‘, I don’t know how to tell the sex of the spider) connects with a solid object? The spider is only about a centimetre in width, so how does it leap almost a metre? Once it is at point B it can anchor the silk and then needs to make another leap of faith to point C, back on to the left-hand wall. It can then crawl back up to point A and then construct the rest of the web.

Once the Pythagoras bit is done, I’d assume it’s easy. 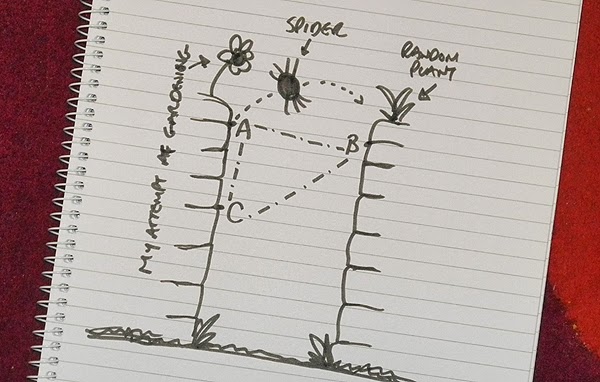 So, do spiders have the ability to jump massive distances, or do they just make a leap of faith and hope they land somewhere useful, or do they employ other devices to create webs? A miniature Zeppelin or a teeny weenie hand glider?

Answers on a postcard please. I need to get some sleep.

Or have I really missed something.