When I started to think about putting a piece together about photographing injuries, it seemed easy enough, I even had an angle tied in with the Eurovision Song Contest. But the more I have thought about it, the more complex the issues became. So here’s one thread, to what seems to me, a very complex issue about communities, sub-cultures, identity, the technological revolution and web 2.0.

Roller Derby, in the United Kingdom at least, has always had an unwritten rule of not photographing injured skaters. I am not aware where this has come from or when it was first applied. It seems to be a rule unique to the sport. A rule that I believe is entwined with the growth of the sport in a an age where the internet allowed the easy and almost instantaneous transmission of information. A tool which Roller Derby uses to it’s fullest, but like many individuals and organisations, is fearful of when it come to negative feelings.

The pros and cons of photographing an injured skater have been discussed by many people. The cons, seem to be the intrusion in to one’s personal tragedy, an invasion when you are most vulnerable and the lack of control of the situation afterwards.  When you’re feeling down the last thing you need is someone making you feel even worse. The pros, it can be a benefit to the sport, highlighting that it is a real contact sport where people are putting their bodies on the line.  This in turn allows the uninitiated to have a greater understanding and respect for the not only the skaters, but also of the sport.

Documenting a skaters injury can also allow the individual to look back an reflect on what happened and come to terms with their journey ahead. And finally, on a purely selfish note, emotion whether good or bad can make a great image. And emotion handled sensitively can be a powerful thing. And in the long run, great images can help promote the sport and build a larger audience. 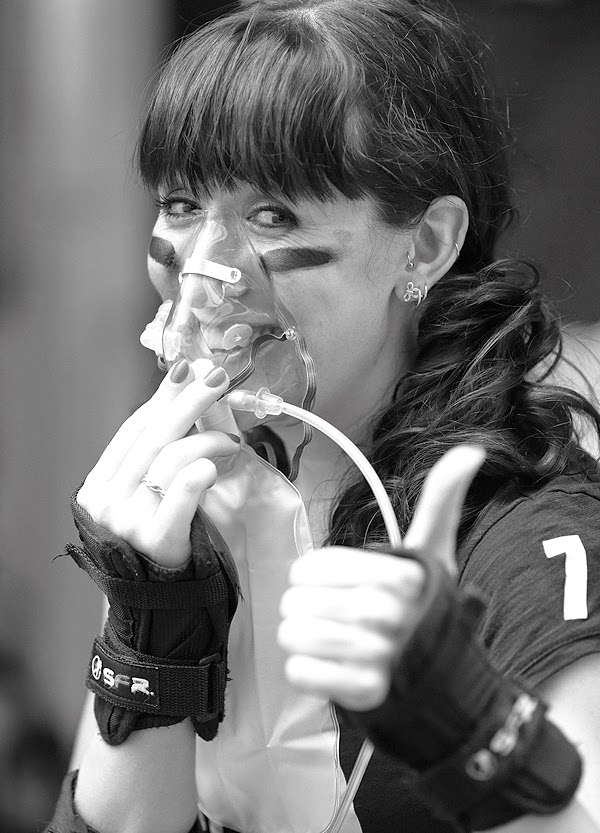 Derby images are usually posted on social media sites because it’s the easiest and quickest way to share photos and it’s also cheap. They go direct in to the public domain. From research it has been shown that people regard social media as their personal domain. They allow information they want in, but unsolicited or information that does not conform to their world view is seen as an intrusion as it does not match their constructed identity. This identity, and how, or who controls it is a major factor adding to the fear of images not posted by the user. We consume images on the web very differently to those in traditional media and want to exert control.

Ask yourself this question. How do you react to a photograph on a gallery wall to one you see on social media? What is your relationship to it? What is the value proposition?  If an image was presented in both mediums would you view it differently?  Would you have different feelings about the photographer?

Generally, in Derby, as in any sport, most images try to convey the athlete at their peak. These images are not a threat to one’s image and identity. In fact they reinforce it. Issues only occur when reality does not match up to the individuals perception. I have in the past been asked to remove photographs from Facebook. Something I was happy to do. Most, if not all, involved people eating. Most people do not look flattering when eating. No shout out from the announcers about not photographing skaters at feeding time! There appears to be something special about injuries, about protecting people initiated in to the community. This trait seems to manifest itself on those on the periphery of the skaters circle, refs, announcers etc… where they can exert some control, not from the skaters themselves. I don’t think I’ve spoken to any skater who had injured themselves that had any objections if I had taken photos, some would have welcomed it, but I’m duty bound by this unwritten rule not to. I feel this protectionism is something that is now totally automatic, something that those who go in to this mode don’t think about or question, it’s almost a reflex action. Universally for good intentions, but intentions that have not be thought through.

Communities are self-regulating. Those that do not abide by the rules will soon be ousted or drift away. The same would go for photographers. Those that do not cover injuries with empathy and sensitivity would not be invited back. Those trusted and respected can do a greater service.

I will freely admit that when the shout goes up from an announcer for people to stop taking photographs my heart sinks. I cannot document the whole sport and a part of me feels that I’m being pre-judged as portraying hawkish and voyeuristic characteristics, someone definitely not to be trusted. I have always felt that derby has had an uneasy relationship with photographers. This could stem from bad experiences, but I would argue more likely a lack of understanding of how photographers work. I will admit that with the rise of cheap photographic equipment, more people call themselves photographers, and many will have not had the experience of how to conduct themselves at events, but again the self-regulating aspect of the community should resolve these issues. People will either learn or drift away. You can’t just run up to someone in distress and put a camera in their face. In fact you can’t do that to anyone, whatever they are doing, unless you know them! And I believe most (99.9%) photographers wouldn’t.

Photographing injured skaters I believe should be opened up to wider debate.  Perhaps this is the starting point. Now the sport has progressed to a stage where it is now ‘a sport’ the matter of documenting injuries should be reassessed. Without covering every aspect photographers cannot do full justice to both the sport and the skaters. 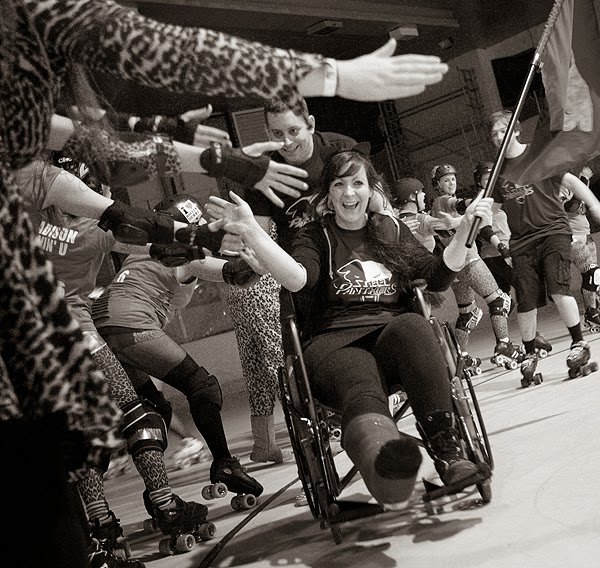 As I said in the opening paragraph there is more going on than I can discuss in this post. I am neither an anthropologist or have the time to delve deeper, but I would recommend anyone wishing to explore the empathy a photographer can have with their subject to watch the Don McCullin documentary.

As I know this can be an emotive subject here’s a brief bio of myself so those that don’t’ know me can have a greater understanding of where I am coming from.

I started shooting Derby in 2008, I will feely admit there was some curiosity in seeing women in fishnets and tutus hitting each other. This was how the sport was described to me by my friend Jenny. What I found was something totally different and far more interesting and I’ve been covering Derby ever since, including the first World Cup in 2011. Between covering Derby I have photographed victims of landmine incidents, people with physical and mental disabilities, learning difficulties, victims of sexual, emotional and physical abuse and those that have been victims of human trafficking. Not always the easiest things to cover, but it has allowed me to meet some remarkable people.