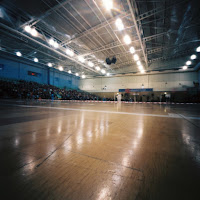 Roller Derby, I think this was at Anarchy down at the Spectrum Leisure Centre

Roller Derby photography requires, what is known in photographic circles, fast glass. It’s no wonder that f/2.8 70-200mm lenses dominate the side-lines at tournaments. Venues are usually dark and so you need to get as much light in to the camera as possible.

Personally I don’t feel that f/2.8 is particularly fast, the Carl Zeiss Planar 50mm f/0.7 that Stanley Kubrick used to shoot the candlelit scenes in Barry Lyndon, is fast glass. Unfortunately not many were made, ten as far as I can tell, primarily for NASAs Apollo missions where 6 were used, and three were acquired by Kubrick. The downside to fast lenses is that the depth of field is razor thin and usually the amount of glass used in their construction either means the lenses are manual focus only or so slow to focus I could draw the scene with a 2b pencil quicker. 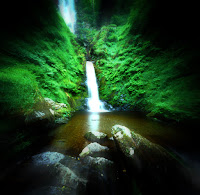 So if f/2.8 isn’t fast then f/138 is a lethargic sloth that has really given up on life. You won’t see many people sitting trackside shooting at f/138, well nobody, except maybe myself on a very special day, International Pinhole Day.

No amount of auto tracking, back-button focus, fancy computer gizmos will help when you are shooting through a teeny weeny hole, f/138 to be precise. 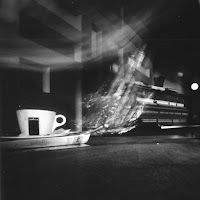 The Jazz player, I had coffee.

Okay, Derby may not be the best environment to use a pinhole camera (did I say camera, it’s really just a box with a hole in it). Unless it’s a nice bright day any environment can be a challenge, but one day a year it’s worth slowing things down, stop being the hare, be the lethargic sloth who’s given up, the results can be surprising. Get your pinholes out. 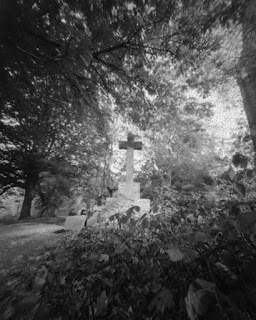 General Cemetery - depending on the light, you may die before the exposure is complete.