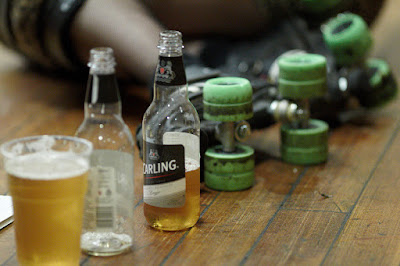 Back in the good old days, women were real women, men were real men, and life expectancy was around 22. Roller Derby was played with a ball like other proper sports, football, rugby and snooker. Life was hard. By the age of 4, if you made it out of childhood, you were handed a brush by a geezer with a none too convincing cockney accent and shoved up a chimney. 12 years later you were let down and if you were lucky sent to the workhouse, if unlucky, rickets, cholera and a slow painful retirement in the gutter by the gin palace was your fate. It was in this blissful idyll, between shifts, that plucky youngsters would strap on a pair skates and play an embryonic version of Roller Derby. The ball, I say a ball, it was just a pig’s bladder stuffed with haggis that the jammer would have to hide whilst being chased by the other players, was an essential part. If caught, the opposing player could take a bite of raw haggis before the ball was handed to their jammer and the next round would commence. The game was broken down in to four quarters of fifteen minutes each with a half hour break between quarters to allow the players to rest, smoke woodbines, and quaff a couple of pints of mild. The winners declared on the most haggis eaten.

The game was never designed to be played without a ball, but one freezing January day whilst a game was in full swing a pack of wild lhasa apso broke in to workhouse yard and devoured the pig’s bladder haggis ball. A range of alternatives were tried, falafel, haloumi and lentils but the players kept eating the ball. So it was decided to try, without one. Over time markers were used to define the different roles. Jammers adopted the star, in solidarity with their Soviet comrades, pivots, the stripe to honour the inventor of the flat-headed screwdriver, the blockers, stickers, to hold their helmets together and the referees, stripes, to resemble Zebras, a well-known foe of the lhasa apso.

I remember photographing my first bout on my box brownie. The skaters dashing wildly over the cobbles, weaving between the gas lights, fumbling in the smog trying to find their opponents and clattering them to the ground. I assembled all the images on to a reel and inserted them in to an old ‘what the butler saw’ device, and charged skaters a penny to relive the day. Over time I acquired more mutoscopes and a second hand organ so that I could accompany the experience with popular music hall songs.

Roller Derby has come a long way. But this weekend ‘Where’s the ball?’ will try and emulate those good old days. Those halcyon days of class war, social injustice and the hope for a better world.