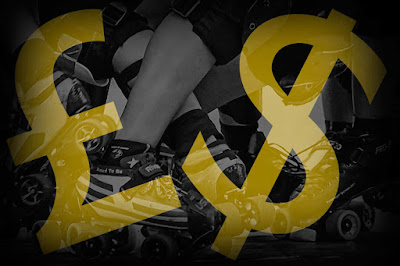 WARNING!!! I have re-written this post four or five times, asked advice and ummed and erred about publishing for a while. I have put things in to monetary terms as I feel it makes things a little less abstract and more real. I do not for once think that photographers should be paid (well, not until everyone else is), their contribution to Roller Derby is no more important than other volunteers, marketers, designers, accountants etc… who help teams to function. But I feel adding numbers helps and highlights the sustainability or lack off for many people. Photography can really enhance the sport, help it reach new audiences, and aid in its growth. For skaters, referees, NSOs etc… who don’t know me I’ve been shooting Derby since 2008, shooting teams across the UK and Europe and attending three World Cups (2 women’s, 1 men’s) and am currently the official photographer for England Roller Derby. I hope all the teams I’ve shot for, supplied images to, and helped out will vouch for my character. So here goes…

The WFTDA recently changed its photography (here’s a link to have a look) policy. Apart from being skint, not being able to get time off work, it was arguably only the third factor why I decided not to go to Malmo, I was asked by a team, but a major one (This is post about photography, I know NSOs and Referees have issues too).

As a photographer it’s a considerable outlay for maybe only three games if you’re only allowed to shoot your teams bouts.

Here’s a breakdown of costs.

I’ve gone for the cheapest options I could find.

Flights from Stanstead to Copenhagen £38.54 – I do worry about cheap flights, how good is that pilot?

Train from Sheffield to Stanstead £63.70

Hotel £303.27 – due to meeting the requirements for insurance on my gear I need a secure place, a hostel just won’t cut it.

This is without any spending money, food, transfers from Copenhagen to Malmo etc… so let’s say £550 all in if I’m being cautious and willing to abstain from fun.

That’s a lot to photograph three bouts. Well, £241.95 per bout. So, one subject I keep going on about is how much is a photograph worth, at this rate if I sell just one per bout (unlikely) it’d be £250 if you allow me to make just a little profit. Anyone want to use one as a profile pic?

Okay, so let’s go with the WFTDA where you can shoot more but are scheduled certain games. $400 will help soften the blow, right? Well okay here’s the mind shift. It’s now work and for the money, underpaid. The costs above are for fun, although it must be said expensive fun, which I could possibly justify if I could shoot teams I’ve never shot before. That’s half of the fun and challenge, allowing one to make new contacts and build relationships with other teams to form more opportunities. I know a lot of people think that photography is just sitting on the side-lines taking photos, and it is for some people. However it is much more, it’s about building relationships, understanding the subject, creating trust. Things I see as important, which this policy helps to curtail.

So working for the WFTDA for $400. As we can see from the figures above I’d be already $325.84 out of pocket before we even start. Okay let’s say I lived in Malmo and I could just amble down the road to the venue.

I’d need to be on site for three days. Which works out at two 11 hours days and one 9 hour. That’s the hours I’d put in being a professional. Post-processing, let’s say 10 hours, that’s without any admin, so I’m working on the bare bones here.

After the shoot I’d feel overworked, no real break due to pressure to get photos released before the next bout. Pay for a picture editor at least so I can concentrate on the photography. The same support you’d find at major sporting events for photographers. The Premier League, NFL etc… are different beasts, there are billions at stake. This is Roller Derby.

Okay, we all know we do this for fun, but there is money being made out there by some people and when volunteers are treated as workers and no longer respected and given opportunity it really makes a difference. I don’t know any photographer who’d not supply images for free if asked by these organisations, but instead of building relationships they bring in contracts. Stakeholders who are volunteers have very different priorities to those who are paid, they have loyalty (but that can become stretched), the other, well they are open to the highest bidder.

So this may sound like a whinge and many skaters may say, hey we have huge costs too. And I wouldn’t disagree, but it’s different for teams, often they will share travel arrangements, hotel rooms etc… so costs are often far lower, and don’t forget the intangibles, camaraderie, the highs and lows and the fund raising efforts to help mitigate costs.

Okay, so I live in the UK and I probably will never, I have no plans to shoot at a WFTDA event, but if others organisations decide to go down the same model it will really drive people out, and the sport be left will the local guy with the camera, you know the type, the one you really don’t want at your event.

So this is a plea, not just to the WFTDA but to all; think about your stakeholders when you put policies in place, 99% of people involved in Roller Derby are volunteers and as such have very different priorities to those in paid work.