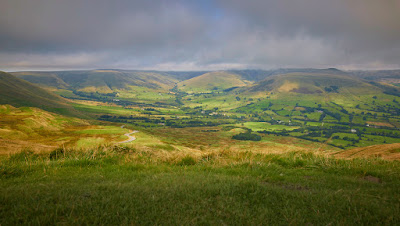 My fitness regime consists of over confidence and wild optimism. For me it works well and I would encourage people to give it a go. Think about what you want to achieve, double it, get drunk and then hit the road.

Working at a university in the UK affords me a few extra holidays, namely Tuesdays after a Bank holiday. My institution doesn’t give this luxury for every Bank holiday but the few we do get are special. That extra day off, when everyone, after enjoying a long weekend has to return to work. It’s a bit of a guilty secret. I used to spend it in coffee houses, watching the world go by but as I signed up to the Global Corporate Challenge (GCC) to monitor my exercise this year I thought I’d get out of the city, get some exercise and do some landscape photography.

I decided to head out to Edale and walk up Mam Tor. It’s a walk I haven’t done in a while. As it was a Tuesday after a Bank holiday I was guessing that it would be quiet. The plan was to leave early, get the 6.20am train and ascend Mam Tor around sunrise to take some photographs. The alarm was set to 5am. At 5am the siren woke me. I managed to flail an arm in the general direction of the alarm clock and eventually silence it, but getting up was much more difficult. My whole body, apart from the flailing arm, appeared to be in some sort of temporary paralysis. There was only one thing for it. Go back to sleep.

Arriving in Edale I resorted to the mental image I had created the day before of the route I was to take. It was wrong. Two hours later I made it to the summit of Mam Tor. A walk that shouldn’t have taken me more than half an hour. I had also forgotten that the path along the top of ridge was paved with stone and I was not alone as I had hoped. The ridge was thronged with ramblers, neatly dressed admiring the view. As my head dropped, dejected, I also wondered why they all looked so clean when my legs, from the knees down, were caked in mud. I set up the camera, took a few shots and then ambled back down via route no one else seemed interested in taking for reasons I was to discover later.

On returning home, I looked at the few photographs I had taken which reminded me why I am not a landscape photographer. I don’t have the patience and de-spotting images due to a filthy sensor is tedious. Roller Derby photography is so much easier. Shooting wide open, one doesn’t have to worry about all the crap that gets stuck to the camera’s sensor and unless one has to travel long distances, getting up at the crack of dawn isn’t an issue.

On the plus side I did walk a lot further than I expected, proving my theory, that getting lost is good exercise. However on reflection, sometimes you are better of just sitting in a coffee shop watching the world go by.