A lens review, with help from Newcastle Roller Girls

I try to add some useful advice to this blog, rather than inane wittering’s and rants about the best place in the country to get the worst cup of coffee. Winning by a long way so far is the coffee machine at Shrewsbury leisure centre. The brown sludge it served up at the cost of one shiny new pound would give Baldrick’s effort on the Western Front a run for its money. Luckily the age of the machine meant that a cappuccino wasn’t a possibility. 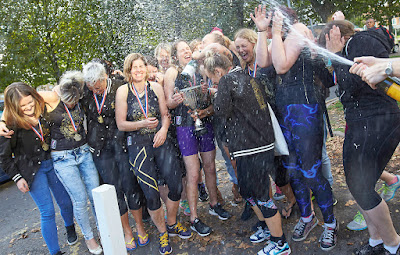 A little while ago I decided I needed a wide angle lens, faster than 2.8. I have used Sigma lenses in the past and have not been overly impressed (it could have been the way I take photographs). The reviews of their new ‘Art’ series lenses have been excellent (there are many reviews on the web), the only issue being is that unlike manufacturer’s own brand lenses the Sigma lenses aren’t weather sealed. So I decided to bite-the-bullet and give one a go.

As there have been so many reviews of these lenses I have decided to concentrate on their weather sealing, or to put it another way, their champagne sealing courtesy of Newcastle Roller Girls after they won the tier two finals of the British Championships.

To my delight it stood up to all Newcastle and the Champagne Appellation could throw at it.

I must confess, it wasn’t Champagne, but Prosecco. It was deemed too wasteful to spray the Champagne in celebration, which was to be drunk later back at the hotel.

So, I must alter my conclusion. The Sigma 24mm ‘Art’ lens, in my opinion is fully Prosecco proof.

I will update this review next year when Newcastle Roller Girls win Tier One and Champagne is used instead.