Hand me my shrimping net 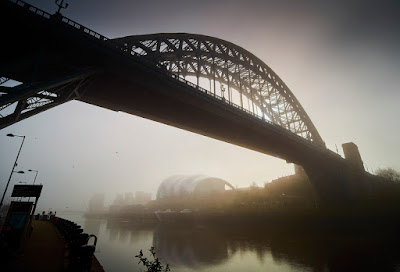 I’m currently wrestling with the Chupacabra, not literally, that would be a (tall) tale to tell, but metaphysically. While I take photos of people going round and round in circles, oh, yeah, that Roller Derby thing, I have other interests. The Chupacabra at present, has caught my imagination.

With the hotel booked, train tickets purchased and a relatively sound knowledge of how to get to the Walker Activity Dome I am all set for EuroClash. I like Newcastle. While Sheffield has a lot going for it, the Peak District, plenty of green spaces and a pretty laid back feeling, one thing it lacks is a decent river, and a river, well, city centre, that makes use of it.

I was working at Warwick castle many years back and I remember overhearing a couple of tourists chatting, one turned to the other and said, ‘gee, isn’t it amazing how they built the river so close to the castle’.  I’m not going to disclose the nationality of said tourists, but they had a point, why didn’t the good inhabitants of Sheffield build the river closer to the city centre? Newcastle has no such problem. The Tyne is a proper river, not knee deep like the Don. Whenever I am back in London I have to cross the river at least once in either direction, north to south, south to north, on foot over one or two of the many bridges. I’m not superstitious but it feels like the right thing to do, the river a defining line between two worlds, where I grew up, south, and where I live now.

When I’m in Newcastle I feel compelled to do the same. The river has a strange pull.

I plan to make more of Roller Derby weekends, indulge some of my other interests to get more out of my time in different places. I doubt I will be able to hunt down a Chupacabra. I don’t think any have been sighted outside the Americas and Newcastle is probably too cold for them, but with some time either side of the competition it will allow me to seek out local superstitions and folklore and of course brutalist architecture. Witches, werewolves and vampires inhabiting a housing estate designed by Le Courbsier, what more could one want? Except maybe a monologue by Jonathan Meades to accompany it.

So when packing my bag, the ultra-angle will go in to capture the architecture, and fast primes, good for low light work to capture familiars dancing in the twilight and those skaters going round and round and round.