If you think Roller Derby is tiring, you should try photography.

Like all of us, it probably starts the night before. Packing the gear for the game day to come. Photographers, in this respect, have it reasonably easy. Making sure the batteries are charged, lenses are clean and memory cards have been wiped. Skaters I imagine have a different scenario to deal with, opening up their kit bag, stumbling, gagging for breath from the stench emanating from within. Then deciding to either wash their kit and hope it dries overnight, or just close the bag and apologise to their teammates about the smell. 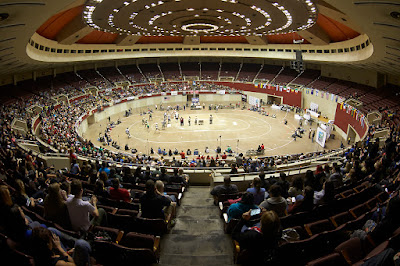 The final day of the Roller Derby World Cup, 2014 in Dallas, Texas.
I spent four days glued to the tack.

Last weekend I covered Rainy City’s Euro weekender. Even though it’s just a short trip across the Pennines it was still an early start. First dropping off a vacuum cleaner at a friend’s house then back home to pick up the gear before heading out for the train. An 8am start to get the 9.11am train to Manchester. Having got off the tram at Victoria to change to the Rochdale line I was informed by a steward that Park Life was happening over at Heaton Park and the trams would soon be busy. I was planning to spend an hour in Manchester to grab a coffee but they suggested I head out of the city centre as soon as I could.

I like to get to the venue early, even those I’ve shot at before. It allows me to catch up with people and check out the light. A new light bulb or one that has recently blown can make all the difference as to where one shoots, especially when you are pushing the camera gear to its limits. On this occasion I headed in to Oldham to grab a coffee before heading to the venue. There were three bouts to cover, at 1pm, 3pm and 5pm. Unlike skaters who may have to play either one or two games in a single day, photographers tend to stay at their post all day. Firstly to capture all the action, and secondly, if one does stray it’s guaranteed you’ll miss the shot of the bout.  I’ve done that before. You just can risk moving.

Whilst the process isn’t physically tiring, except on the eyes, mentally it can be exhausting. Keeping alert, not only on the track but also on the periphery. You never know what may happen. 6 hours track-side concentrating. Of course the next phase of the operation, was purely self-induced. A trip in to Manchester to meet friends for a curry, a few beers, then some decent whisky. Luckily day two didn’t start until 3pm on the Sunday. One last bout then a dash for the tram. A couple of lucky connections and I was home by 7pm. Phase two could now commence.

Backing up the files and processing the images can be time consuming. I have my workflow down to fine art, but still, it can take a while. Multi-tasking, downloading the images whilst cooking saves time. The menu can help. Nothing too labour intensive, but also with convenient breaks, lasagne is good. Plenty of time when the tomato base is cooking down to organise the work, then make up the bechemal, and pop it in to the oven. This then gives twenty minutes or so to finish backing up. It also gives one a good excuse to open up a bottle of red wine.

The next two nights were spent processing the images, backing up the high-res files and uploading the low-res to Facebook. Having worked with the press I understand the need to be timely. People don’t demand, but like to see the images soon after the bout, to re-live the day whilst it’s still fresh in their memories.

Wednesday evening was spent tidying up, writing discs, printing some of the images out to check the quality and the last few pieces of admin. Memory cards wiped, lenses cleaned, batteries charged ready for an early morning train down to London on the Saturday, to do it all again.