Sitting trackside and shooting a bout is just one aspect of Roller Derby photography. Building contacts and networking are equally important. Preparation and editing also come in to play. Editing is probably the longest process. Backing up files, selecting the shots, writing a recipe to process the images all takes time.  Important, to get the best out of the images shot. Music helps to make this process easier. 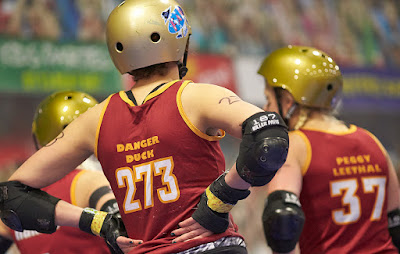 I have an eclectic taste in music, some friends just call it ‘shit’. From easy listening, classical, pop, punk, rap, through to thrash, I dip my toes in many genres. I don’t have a set music type to edit to. Spoken word however is a no go. David Sedaris makes me too lethargic, Bill Hicks, too angry. Usually, as I am very lazy, it will be whatever has been left on the stereo. According to Terry Pratchet and Neil Gaiman this will eventually end up being Queen.

Last Sunday however, the Beastie Boys had not yet metamorphosed in to Freddie Mercury. Certain songs remind me of certain people. Early Sunday morning, 'Sabotage' reminded me of one person in particular.

It’s the same with numbers. When I’m charged to do a task involving maths, most numbers mean nothing to me, others I alight on bring back other memories, other faces.

When I’ve been asked to attend a meeting in a room I’ve not been to before it’s good to know that even the simplest thing, such as room number, can easily distract. Making one’s mind wander back to more enjoyable days. Days when one is not at work.