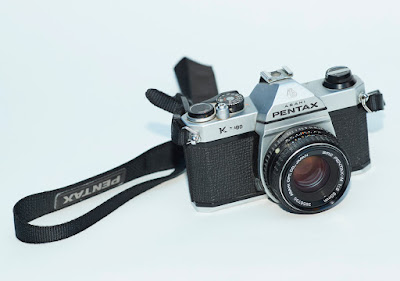 Digital cameras, like much digital technology lacks a certain something, is it the feel, smell, distribution of weight or something else? Technology now comes in little boxes, no real definition or shape, just a box. It’s no wonder we still use icons that reflect older technology to represent the new. All icons would just be little boxes. We wouldn’t know what function we’d want to activate. Younger generations not even realising why ‘that’ symbol represents ‘that’ item as they have never used the technology it represents.

My right thumb has become redundant. I’m thinking of getting it surgically removed and replaced with something more useful, a corkscrew or bottle opener come to mind. It’s no longer really used when taking a picture. After pressing the shutter I miss that automatic, reflex action of forwarding the film on, then the mechanical sound of the camera as the film advances and the slap as the advance arm pings back in to position, waiting for the next shot. Even my EOS 3 lacks this. The camera automatically advancing the film and then rewinding it when the film has been exposed. But at least there is some noise, admittedly not that mechanical, manual noise in sync with one’s thumb, just the advance or rewind of an electronic motor.

Although many people get wowed by the specs on modern cameras there are many aspects they don’t realise they miss. The noise. Now replaced by a meaningless and superficial audio file to make the user feel as if their device has actually done something or the slight radiation from Thoriated glass.

For example, every time you take a picture on an iPhone, the noise you hear is a recording of a Canon AE1. There is no reason why a camera with no moving parts needs to make a sound but without one it just doesn’t seem right.

Even digital SLRs where there are moving parts lack the same sound they once had. It’s probably rose-tinted spectacles time, which I now have to wear due the radiation issue.

Watching sports on the television I can feel when the action is reaching its peak, my shoulders tighten, my finger trembles. If I was trackside my finger would be depressed on the shutter, and then silence after the burst. The slap, slap, slap of a camera’s mirror moving up, then down, over and over, 10 to 14 times per second.

Listening to that same sound captured at sporting events I can feel the excitement the photographer(s) must be feeling. I have no idea who they are, who may be many thousands of miles away, but when I hear that noise I can sit back and think to myself, ‘whoever you are, I think you’ve got the shot’.