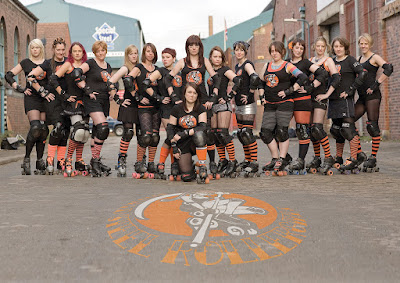 Team shot for Sheffield Steel Rollergirls. An early Sunday morning in the industrial area of Sheffield. I believe none of those pictured are still skating.

I’ve been shooting a lot less Derby this year. 4 events so far and to be honest it’s nice to have my weekends back. Getting up late, doing all that ‘life’ shit at a more leisurely pace, generally taking things easy. Not only have I reclaimed my Saturdays but also Sundays. No longer spent in front of the computer editing to get the files out before the start of the working week. The other added benefit has been that I’ve been able to concentrate more on other artwork, and re-hone my drawing skills.

So many people, especially refs and NSOs seem to be putting themselves under a lot of pressure to staff events to keep their CV current (Where did this whole CV thing come from?) so they can cover the bigger events. I ‘suppose photography is different. It’s the hobby, and Derby is just a subject, one of many I can point my lens at. I feel no pressure to compete, it’s not in my nature. If teams want me there to cover a bout, and supply coffee, I’ll usually be there. I have to get something out of it. Cold hard cash will never trade hands so it has to be something less tangible. That, is fun.

Looking back, part of the fun in the early days was the creativity involved. Setting up team shots, images for brochures, press releases, being creative to get the message out there. As the sport started to gain traction more and more of this ‘fun’ side started to fall by the wayside. Training became more important, less time for creativity.

Sheffield Steel Rollergirls recreating film posters to feature in a calendar to help raise funds. I don’t’ believe it ‘washed its face’ but did bring new and old skaters together to co-operate on a shared project off the track.

I’m not going to stop shooting Derby, but I do miss the days when there were more facets to it, perhaps it’s just a case of rose-tinted spectacles. Looking back my photographic output was more diverse, creative, rather than just from the inside of sports halls that have seen better days.

So instead of this just being a lament of what once was, it’s also a call out to re-kindle creativity and generate ideas. After all, the World Cup will be hosted in Manchester next year and if it gets picked up by the press they will be yearning for good quality images of the sport.