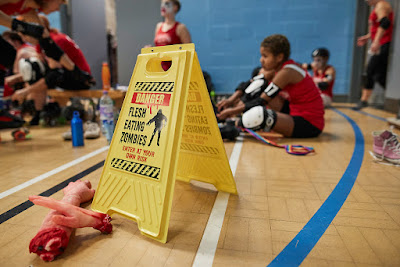 I wanted blood and gore, but I didn’t think it’d be mine.

Sitting in the suicide seats there is always a possibility of being hit by a skater. I’ve never been hit, the camera has been pranged a couple of times and I’ve had some close shaves but that is about it.

I thought the London Rockin’ Rollers Wreck league’s Halloween bout would get me some good images, a throwback to the time when skaters dressed up and the whole scene was more theatrical. It reminded me of my very first bout, Leeds Roller Dolls against Sheffield Steel Rollergirls, Summer Horror Day, where the Leeds team donned zombie face-paint and skated out, to how I’d imagine dead people would skate. The only corpse I’ve ever heard of roller skating is that of Elmer McCurdy, and I image he wasn’t too athletic. Just rolling up and down the high street as the local kids pushed him along.  I believe that past-times such as taking a corpse for a stroll around your local park is now frowned upon for some reason.

I had never been hit by a skater until last weekend. I guess it was bound to happen sooner or later, I’d grown to feel impervious, that for some reason they’d always miss me. I was wrong. Luckily my cat-like reflexes kicked in and my brain sought to protect my most valuable assets, my cameras, as the skater slid ever closer. The impact pushed me backwards in to the wall where my trailing arm cracked against the wall, shattering bone and spraying those close by in a shower of blood. The arm nearly severed, hanging limp and useless. Okay, that may be a lie, but it was a Halloween bout so a little exaggeration shouldn’t go amiss. Luckily both I and the skater was fine. I did crack my elbow on the wall during the impact but I didn’t even bruise, no evidence of my only Derby injury!

Next time I see a skater come flying in my direction I may consider moving, but then again, I’m just too lazy, I will just hope they miss me. And if they don’t, well it’ll be another good story to tell.