Shooting on a budget. 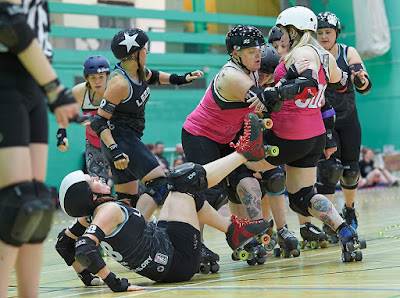 Testing out the new lens, something wider than usual.

Photographing Roller Derby is an expensive business. To get sharp, clean, in-focus images requires some good fast glass and a reasonable camera. When I started shooting Derby, I was using a Canon 5D, the maximum iso was 1600, you could push it to 3200, but it wasn’t advised. Those days are long gone and even a mid-range body will nowadays allow you to shoot at iso 3200 or 6400 with good results. Unfortunately, while camera bodies and sensors have got better, glass is still glass and prices for quality hasn’t tumbled.

So how can you shoot Derby on a budget? My go to lens is the Canon 135mm f2. Not cheap new and still reasonably pricey second hand. Most Derby photographers like a 70-200mm f2.8, whether you shoot, Canon, Nikon or Sony, they are not cheap either, setting you back far more than my trusty 135mm.

I’ve been considering purchasing a new lens for a while. Something slightly wider than I usually use. Having two 85mm lenses seemed a luxury, but the 85mm f1.2 isn’t a lens for Derby. When I moved to Canon from Pentax it was the only lens I had for the first two years. An excellent piece of glass, but so slow to focus, so I decided to take the plunge and purchase the 85mm f1.8. As an older lens design it can be bought second hand for £200, so I was dubious about the quality, hoping for the best but expecting adequate.

When the lens arrived, I was once again surprised. Not a mark on the lens, it didn’t look as though it had ever been used. All the lenses I’ve purchased second hand have been like new. I’m thinking some people have more money than sense. On testing I was disappointed. The chromatic aberration was terrible, magenta fringing on high contrast subjects, far worse than I had ever seen on any lens. On reflection the target subject and environment I had used had been a bad one, getting out the next day to undertake some follow-up testing the issue was not apparent, I felt better, but how would it stack up in a dark sports hall?

Trackside the lens didn’t falter, accurate focussing, far surpassing my expectations. Okay, I had it mounted on a good body but testing on a 700D at work it maintained it accuracy. So, if you are looking for a Derby lens and you are on a budget, the Canon 85mm f1.8 is an excellent buy. 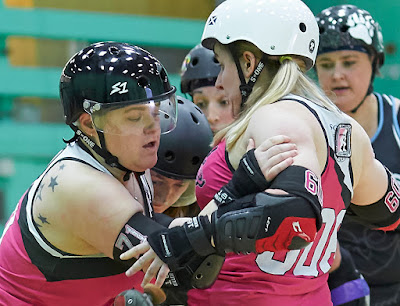 100% crop from the image above. I was surprised by the speed of focusing and sharpness when shooting at iso 3200.