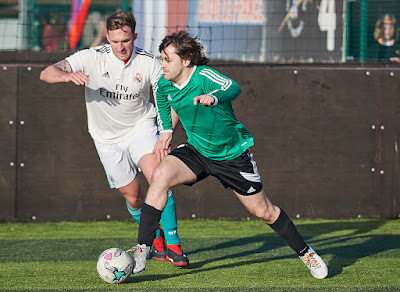 I was excited about shooting something different, something outside, something with plenty of light. It should have been easy but by the end of the day I was longing for the conformity of a Roller Derby venue.

I was asked to cover a charity five-a-side football competition in support of the Rainbow Laces campaign and thinking I could apply my prior knowledge, coupled with good light, would make this assignment easy. It became apparent that the ball was a vital aspect of any image, the focal point telling the audience that this was a football match, as images not containing any other paraphernalia, goal post etc… just showed people running around a field.

Where did I go wrong? Not conducting any research was a major factor. I didn’t even think of what the venue would be like. I got so giddy thinking I could shoot outdoors I didn’t think about any other factors. 1/2000th second at f5.6 at ISO 800 is a dream scenario for any Derby photographer. The constantly changing light and the sun disappearing rapidly over the horizon at sunset when the competition overran were factors I hadn’t anticipated. Floodlights with a lumen capacity of a rapidly diminishing candle harassed by an over-excited moth, didn’t make anything easier. I finished the competition shooting at 1/250th at f2.8 at ISO 12,800, with some very blurry images.

Neither had I anticipated shooting through thick wire mesh. I should have realised that there had to be a barrier to stop the ball as players lofted it skywards and shooting low was out of the question due to the boarding around the edge of the pitch. The haphazard nature of the game as the boards were used as an extra player. Players bouncing the ball to their fellow players on these boards and hefty kicks easily sending the ball from one end of the pitch to the other made this a different beast to normal football.

I worked things out in the end, but conducting some research would have made things much easier. I could have Googled the venue, but I was just too damn lazy.

‘Where’s the ball’? Well if it’s not in the image, it could be any sport.