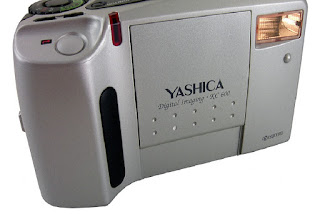 My first digital camera, it was great, image resolution was less than 1/2 a megapixel.

Shooting Derby at the Thunderdome is always a challenge. The lighting pushes even the latest cameras to their limits. It is amazing how far camera technology has come in a relatively short period of time.

I got my hands on a digital camera way back in 1997. A Casio QV10. It was a revelation. You could take and view an image instantaneously, well, as instantaneous as technology was back in 1997. No longer did you have to wait to use up a film and either take it down to the local lab to get it processed, or roll your sleeves up and do it yourself to see your images. The resolution wasn't up to much, just 320x240 pixels. But apart from its shortcomings it was magical. After a weekend of wonderment it was returned to its rightful owner and I went back to film.

It was a few years later until I purchased my first digital camera, a Yashica KC600 a massive step up from the Casio, 800x600 pixels. At last images would cover a complete monitor screen. It also came with a 1MB Compact Flash card. Film still ruled and it was only when affordable DSLRs became available did the balance begin to shift in favour of digital. Since then I have owned many different brands of digital camera, Pentax, Nikon, Fuji and Canon, settling on my latest system due to the fact that I could borrow lenses off mates.

Technology has made capturing images, which a decade ago would have been impossible, possible. If it wasn’t for technology, I’d just be a spectator.