Technology has made life easier. It has opened up possibilities which never existed. This current incarnation of Roller Derby relies heavily on technology. Not only has all the equipment, pads, helmets and skates evolved but the way ideas are communicated and communities are formed have been radically shaped by technology. 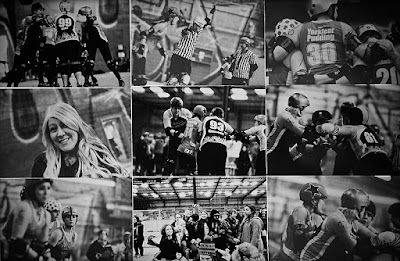 Look on Facebook after a weekend and there are a plethora of albums from various bouts from around the country. Digital imaging has come a long way, making it easier and easier to capture the action. Not that technology is the be all and end all of getting a good image. A sense of composition, an eye for the action, knowledge of the sport and building relationships with the participants all count in getting a great image.

Whilst some of the technology has become more expensive the creation and dissemination of images has become cheaper and cheaper, almost negligible. This has allowed the sport to reach a larger audience faster than would have been possible in the past.

I have shot derby on film before. This year I thought I’d give it another go. Previous experience has taught me that to get a great image using manual focussing lenses and a fully manual camera is nigh on impossible. This is probably the reason that you see the same images of Derby from the early days crop up again and again. You don’t get lucky that often.

I have found that a reasonable body and lens is more than adequate to get a sharp image. My current set up is an EOS3 with a 135mm f2, the same lens I use for the majority of my digital images. For film it depends on the light, either Neopan 1600, I have few rolls stashed away as it’s now discontinued or TMAX 3200 if it’s a tad darker. Okay, unless you are really lucky it will be the TMAX.  The real difficulty is finding the right venue and outfits. A more even light across the whole venue and not just from above would be a great help. Teams wearing different colour leggings so the bottom half of the image does not become a morass of black would also be a great help. And while I’ve sent my last few rolls off the processors, developing them at home for more control would be advantageous.

Shooting Derby on film is not impossible, it just presents a new set of challenges and backloads the costs on to processing the final images. While I am happy with how it’s going I am on the search for the right venue where the technology will perform at its best and I can create images that approximate those I get using digital. It’s good to use a mix of technologies and set oneself new challenges.

One final point, the main reason for doing it, the shutter on a film camera sounds so much nicer than those found on digital cameras. Close your eyes and press the shutter.