The camera isn’t your friend.

I’ve often been asked if I’d ever put together a rogues gallery. The worst faces pulled on track. I’ve refrained as I don’t think it’s be fair on those who’d make the cut and I’m also pretty sure who’d win. 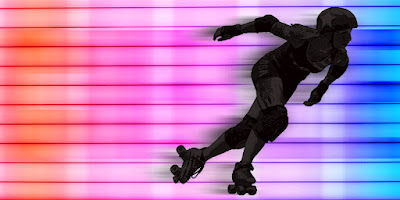 If you have ever watched athletics on TV, especially a short distance track event, such as the 100 metres, you will know that from the slow motion replay the camera isn’t your friend. Even bodies in peak condition, when analysed in slow motion, move in an uncomfortable way. Muscles and subcutaneous fat forced one way and then another by the forces exerted on the body, the face contorts as the athlete focuses on the task in hand rather than what they look like.

A photograph is a snapshot of one’s life, one, five hundredths of a second in a person’s life. Possibly less. Not every image will be perfect. The camera doesn’t lie. The camera can’t lie.

After every Roller Derby shoot the majority of images I take get cut. Either they are technically below par, blurred and out of focus or the composition is lacking. Nowadays I am quite ruthless. Any image which won’t print up to A3 gets cut. The composition must work between the point of focus and the background. Images are quickly whittled, sometimes less than 1 in 20 are kept.

Photographs where the skater has their eyes closed, or pulling a stupid face are cut. It is amazing how many skaters, at all levels of the sport, close their eyes when they are going around corners.

Photographers are after great images, to make us look good, we have to make you look good.

The camera isn’t your friend, but your photographer is.