I had planned at the beginning of the year, like always, to try and cut down on the amount of Derby I was shooting. September will be a busy time at work and I could do with the weekend’s to relax and get real life stuff done, but like all best-laid plans of mice and men, things often go awry. I think it’s my inability to say ‘no’ that’s the problem. I plan to say ‘no’ but it just comes out as ‘yes’, or things come up that I just want to cover, which admittedly is my own fault. Thankfully I think I finally have the garden under control. So that’s one less thing to attack me in the dark.

The ‘yes’ word will see me ping-ponging up and down the main train line from London to Leeds for the next month. First down to Nottingham for Hellfire Harlots (A/B) versus Central City Rollergirls (A/B), then the weekend after up to Leeds for Hot Wheel Roller Derby versus Middlesbrough Milk Rollers. The weekend after, a godforsaken early start to hit the British Championship Tier 2 Playoff final, Newcastle Roller Girls, Hellfire Harlots, London Rockin’ Rollers and Royal Windsor Roller Girls duking it out on track with a trip to Wembley Stadium the day after to watch Argentina versus the All Blacks in the Rugby Union World Cup. 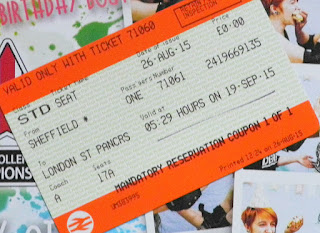 The weekend after, the last ping, or pong, depending how you are counting, up to Leeds for the Great Yorkshire Showdown. And then rest.

So if you see me on your travels please only ask me the following questions. Do you want coffee? Do you want beer? Because, I confess, I can never say no.