MRDWC - the value of a photograph

What is the value of a photograph? In Roller Derby at least, practically zero, the few magazines that take images can’t pay, and those that do can only afford a nominal fee. However there are more ways than monetary to measure value. 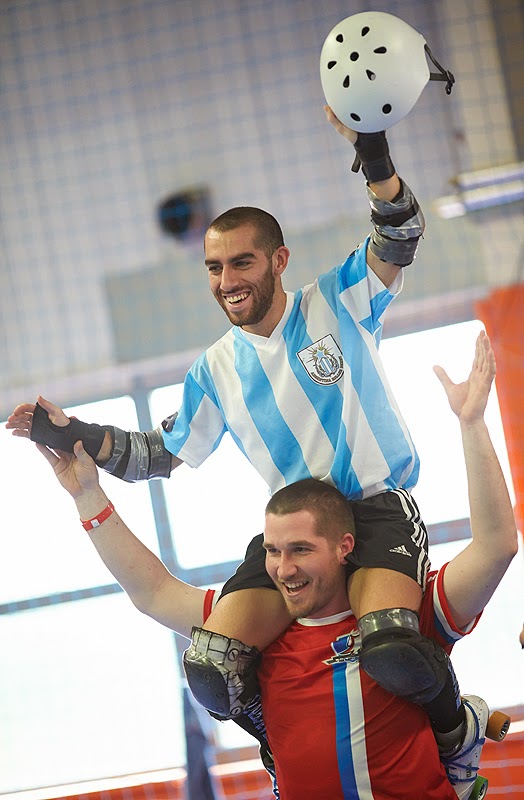 I took the photo above, as I was there, I was unaware the moment it symbolised at the time.

Argentina had won many friends by the time of their bout against France. Their 8 skaters showed true grit, determination and passion in face of overwhelming odds, and their jammers speed and agility proved they had the skill to be a force to be reckoned with.

It was at the end of this bout that there seemed to be a seismic shift of admiration for what Argentina had achieved and what they could if they had more skaters. Their adversaries, France also played their part, consoling and congratulating them in equal measure, uniting both teams in true camaraderie, the best Roller Derby can offer.

I posted the picture on the Saturday night, while backing up files in my hotel room. I shut the computer down and went to bed and thought nothing more of it. I checked the Facebook page early the next day to find that the image had had over 11,000 views. To date it has had over 16,500 views, 85 shares and 340 likes.

So what is the value of a photograph? For me it can inspire, induce emotion, engage and excite. It can make people think , be inquisitive and want to find out more and discover the stories behind the image.

Having checked the Facebook statistics, my Roller Derby on Film page has had just over 100,000 views, countless ‘likes’ and more comments than I can count, many in languages I can’t even begin to translate.

Hopefully they will not only be a reminder of a great tournament for those that were there, but also inspire the next generation of skaters, refs, NSO and helpers and bring the sport to a wider audience. That, I feel, is the real value.