The best camera for Roller Derby?

I often turn up to a bout and feel a bit of a fraud. I dial the same settings in to the camera for virtually every bout. I do take light readings, more in hope than anything, that the lighting will allow me a bit of leeway so I don’t have to push the gear to it’s which in turn will allow me a bit more creative freedom. Mostly I’m disappointed. Back to the old settings.

So what is the best camera for Derby? 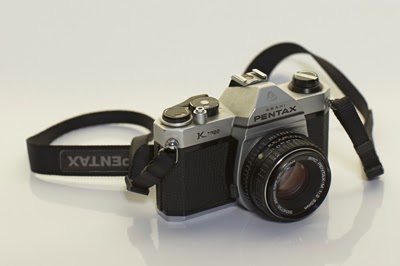 As I cast my eye across my studio I spied my old Pentax K1000. A 1976 Asahi specimen. Totally manual. You pop in your film, set the ISO, choose your aperture and then set your shutter speed. Off you go. Apart from the automatic focussing, the Pentax has none, manual focussing only, there’s not that much difference between my current camera and the K1000. Or at least how I use it, or how a camera works. So while the K1000 may not have all the latest bells and whistles it did teach me how to use a camera, so in certain respects it‘s the ideal camera. It’s unforgiving in many ways, but will teach you all the basics needed before heading out to the track. And I have used it for Derby in the past. The only thing letting it down is the lack of film stock. I have three rolls of Neopan 1600 left. Then that’s it.

It may not be the best camera to shoot Derby with, but it will teach you how to set your camera up to get the most out of your latest gear when you do get track side.  And unlike modern cameras it’s built like a tank, there’s little to go wrong with it, and for a camera that is 37 years old, it can still take stunning photos.