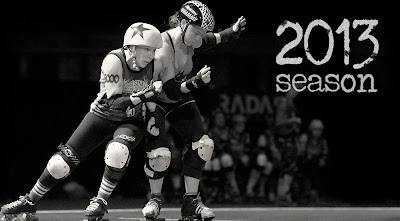 2013 is just upon us and most teams seem to have re-started their training schedules and it looks to be a packed season.

Looking back at 2012 is there anything I have learnt about shooting Roller Derby?


Well yes, actually. The first one being, keep shooting, you can always eat another day.


Tournaments can be hectic, eating up memory cards at an alarming rate, and with bouts come round so quickly there is little time to back up files up and seek out coffee in the break. Usually I prefer to back everything at the end of the day, so I can do them in a logical order, and make sure everything is backed up before I delete the cards, ready for the next day.


The European tournament had seven bouts in a day with the final bout not finishing until 10pm. This meant a 2-3am finish at the earliest with a 7am start if I covered everything. 4 hours sleep isn’t the best day to start another full on day. I learnt at the World Cup that covering everything isn’t possible so I decided to play it safe.


So at Track Queens I took to skipping the final bout on the first two days to seek out food and in the process missed two great games. That wasn’t my greatest mistake. I wanted to shoot the Stockholm/Berlin game but decided to do the first half only so I could watch the second and back files up. Complete school boy error. Even with two or three jams to go and I could have still grabbed the camera and shot the final few minutes of an exhilarating game. I was disciplined and decided not to. Be sensible, you’ve shot enough for today. And then, in the final few seconds of the final Jam, Stockholm’s lead was eroded by Berlin and they just clinched it. The place erupted. It was great to watch but I should have got that final shot as the whistle blew. Next time I’ll be less sensible and grab the damn camera, sod sleep, who needs it?


The next is, if you have time, pull the curtains.


This isn’t always possible. But at some halls that double up as corporate banqueting  venues, such as Ponds Forge, back velvet curtains are in place to disguise the venue for these occasions. Sometimes I’ve forgotten to pull them across to create a matt black background to isolate the skaters. What could have been a great shot is mediocre due to the background. Bugger. And I’m not one for much photo-shopping,  ethically, I think it’s wrong, but more importantly I’m lazy and can’t be bothered so I want everything in camera. Pull those curtains it only takes a couple of minutes!


Finally, when travelling to another part of the country to shoot a bout, always take an NBC suit with you. This is not insurance in case World War Three breaks out whilst on your travels. Rather a counter measure against the Derbyonic plague that has been doing the rounds. Too many times have I been chatting to skaters from various leagues to have this fateful line delivered to me, “I think I’m coming down with the sniffles”, then to return to Sheffield and be stricken down with the lurgy, blocked sinuses and more snot than can fill a bath tub. Perhaps a beaked plague hood with nosegay is in order.


So next year, if you see a shuffling figure in an NBC suit, beaked mask, nosegay, camera in hand, blood shot eyes from too little sleep, jabbering and dribbling from being jacked up on too much coffee, who appears to have a curtain fetish, I’m just employing everything I’ve learnt from last season.